Metaballs are organic-looking n-dimensional objects. We will be implementing a 3-dimensional metaballs. They are great to make bloppy shapes. An isosurface is created whenever the metaball function crosses a certain threshold, called isolevel. The metaball function describes the total influences of each metaball to a given points. A metaball influence is a function between its radius and distance to the point:

Marching cubes essentially voxelize the space, then generate triangles based on the density function distribution at the corners of each voxel. By increasing the voxelized grid's resolution, the surface eventually gets that blobby, organic look of the metaballs. Marching cubes can achieve a similar effect to ray marching for rendering implicit surfaces, but in addition to the rendered image, you also retain actual geometries.

Marching cubes are commonly used in MRI scanning, where you can generate geometries for the scans. Marching cubes are also used to generate complex terrains with caves in games. The additional geometry information can handily support collision and other physical calculation for game engines. For example, their bounding boxes can then be computed to construct the acceleration data structure for collisions.

Warning : this assignment option requires more effort than the ray marching option. The two base codes diverge significantly, so switching options midway can be costly for your time and effort.

We suggest reading the following resources before starting your assignment:

We have provided a basecode as a reference. You are welcome to modify the framework for your project. The basecode implements metaballs on the CPU.

This is a global configuration object. All information for the marching cubes are stored here.

Note : App.visualDebug is a global control of all the visual debugging components. Even though it is helpful for development, it could be memory intensive. Toggle this flag off for better perforamance at high resolution.

This file contains the edge table and the triangle table for the marching cubes.

Implement the update for metaballs to move its position based velocity. Reverse the velocity whenever the metaball goes out of bounds. Since the metaball function is not well defined at the boundaries, maintain an additional small margin so that the metaball can reverse its moving direction before reaching the bounds.

Implement the metaball function inside sample of MarchingCubes. This function should return the total influences of all moving metaballs with respect to a given point.

In order to polygonize a voxel, generate new samples at each corner of the voxel. Their isovalues must be updated as the metaball function changes due of metaballs moving.

Implement polygonize inside Cell class. This function should return the list of vertices and normals of the triangles polygonized in the voxel.

To compute the vertices, we have provided the look-up tables from Paul Bourke's. The table assumes the following indexing scheme: 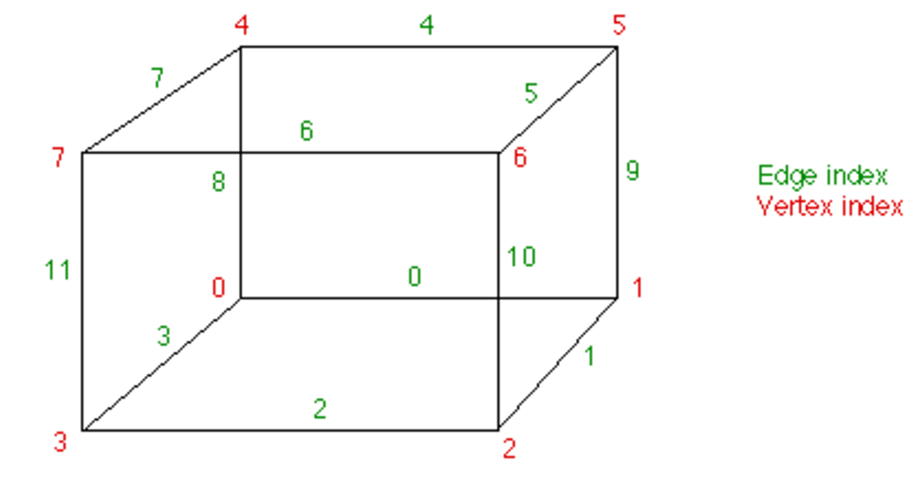 Compute the normals using the gradient of the vertex with respect to the x, y, and z. The normals are then used for shading different materials.

The mesh for the metaball's isosurface should be created once. At each frame, using the list of vertices and normals polygonized from the voxels, update the mesh's geometry for the isosurface. Notice that the total volume of the mesh does change.

Interesting shader materials beyond just the provided threejs materials. We encourage using your previous shaders assignment for this part.

Extra credits (Up to 30 points)